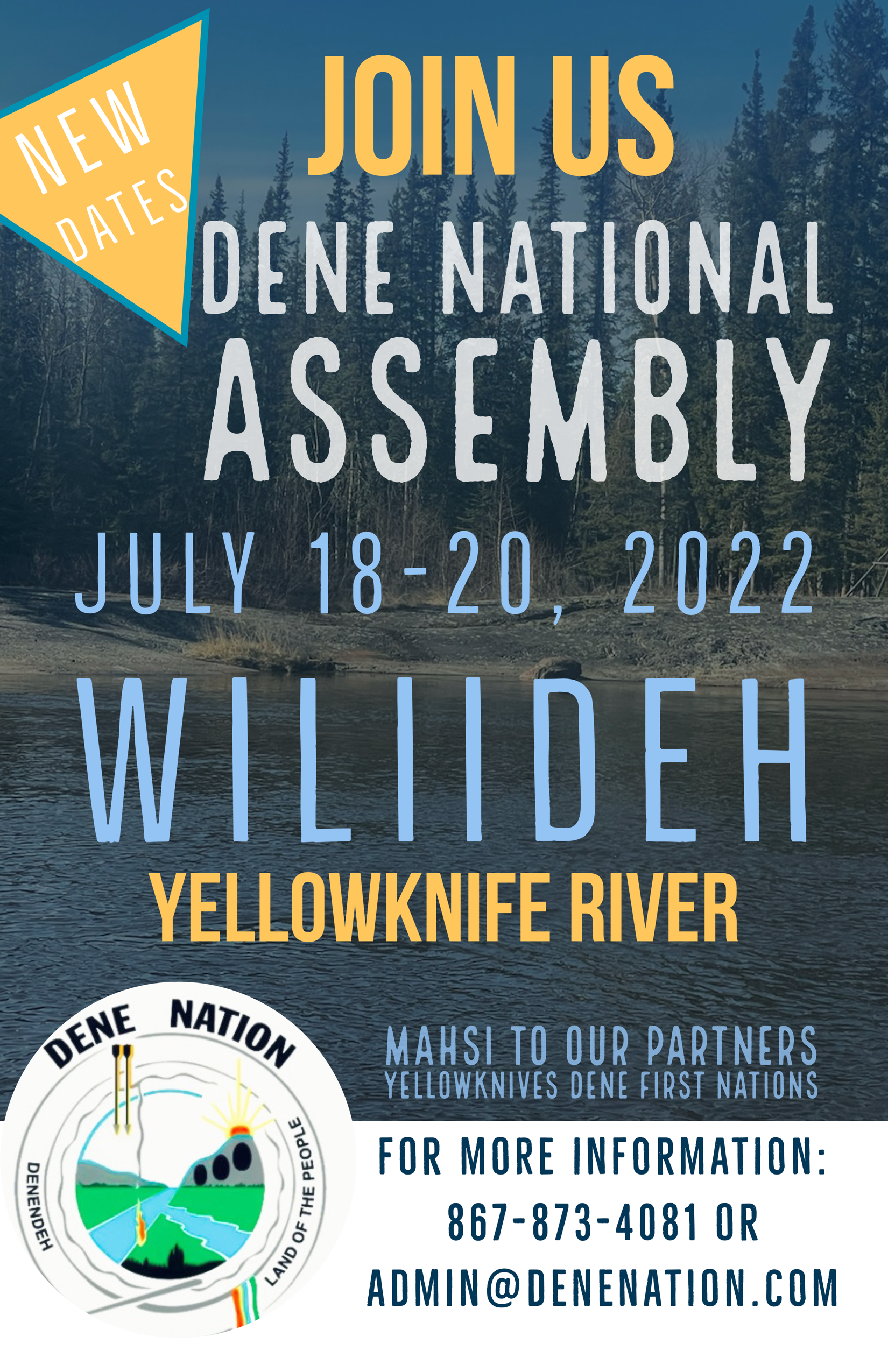 The Dene National Special Assembly is scheduled for July 18-20, 2022 at the Wiliideh Site (Yellowknife River) in the Akaitcho Territory. The date was moved up by one day to accommodate travel for other events as directed by the Leadership and Elders.

The Dene National Special Assembly agenda will include the Unmarked Graves for which we have secured funding to cover expenses for one leadership from each community to attend this special assembly. All other delegates/participants expenses will not be covered. For those who wish to attend please be aware that consistent with the Dene Nation constitution you are responsible for your own travel, accommodation and meals, and any expenses arising from this meeting.

For more information, please contact Alice Liske aliske@denenation.com at the Dene National office or call 867-873-4081. Please submit a name of your leadership who will be attending to Twyla Sangris at tsangris@denenation.com to book their hotel and travel arrangements as soon as possible to avoid disappointments.

Thank you for your attention and we look forward to seeing you in attendance at the Dene Nation Special Assembly at Wiiliideh Site this summer.

The Dene National Assemblies traditionally convene each summer in July and is hosted in different communities within the five regions of Denendeh, namely Gwich’in, Sahtu, Deh Cho, Tli Cho (Monfwi) and Akaitcho. Many people from the 30 Dene communities travel to these meetings via air, road (if it’s all-season), and/or boat.

The Dene Nation holds these annual and special meetings with equal opportunity for communities to host the assembly where Dene leaders have discussions, consultations and make resolutions. It’s where the leaders come to make their voices heard and commemorate the struggle for retaining sovereignty and advancing Dene concerns.

The venues of the handgames and drum dancing celebrations are equally impressive.

At the closing of the 40th Dene National Assembly held at Fort Good Hope, Denendeh from July 12-16, 2010, Dene National Chief Bill Erasmus said, “This was a time to celebrate the many achievements of the Dene and to honour the past and present leaders who worked diligently to preserve and protect the Dene culture, lands and environment for future generations. It was a time to reflect and evaluate where we are today and to strengthen our vision for the future.” Chief Erasmus thanked all the leaders, official delegates, elders, youth and visitors for attending the meeting. He said, “Wishing everyone a great summer with your families and we look forward to working together over the years to come.”

Official delegates must be Chiefs or proxy representatives authorized by a proxy letter from the Chief as outlined in the Dene Nation Constitution and By-Laws.

When addressing the floor, delegates or designated spokespersons must identify themselves and the community they represent for recording purposes. Any full member of the Dene Nation is entitled to participate in the National Assembly and to voice his or her opinion on any issue under discussion; but, where consensus is not reached among all, voting privileges are reserved for official delegates.

The assemblies are presented in both Dene and English with the simultaneous translation being offered during the days of the event.

At the 41st Dene National Assembly at Fort Providence, Denendeh July 11-15, 2011 drummers gathered for the “Feeding The Fire Ceremony”.